St John Western Australia has a proud history of helping people in sickness, distress, suffering and danger. But we’re not the only ones.

Everyday, members of the community, emergency staff and volunteers go above and beyond to deliver first aid, preventing death and serious injury to those around them. We recognise these people as the true heroes of our communities and wish to acknowledge their actions through the presentation of Community Hero Awards.

The St John WA Community Hero Awards are given annually to honour nominated individuals who have displayed enormous courage, and exceptional judgement in assisting another human being with an emphasis on delivering critical first aid. Selected nominees are awarded at a ceremony at Government House each year.

The Community Hero Awards are awarded in two categories:

Anyone can nominate another person for a Community Hero Award. An individual only needs to be nominated once to be considered for an award.

Nomination forms for 2019 can be submitted below and are also available for download in PDF format here. 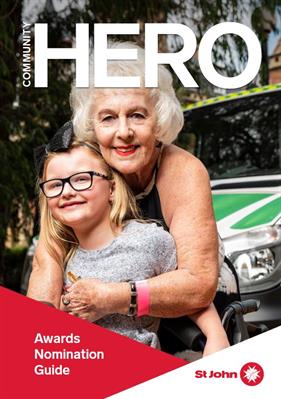 A selection panel will assess all the nominations for both the Community and Service categories based on the criteria outlined in the award nomination guide.

*An award will not be given in either category if the selection panel deems no nominee has met the criteria.

Submit your nomination by filling in the online form below or alternatively download the Awards Nomination Guide in PDF format.

Nominations must be received by St John Ambulance WA by , Friday 13 December 2019.