Defib for Darlington and school community 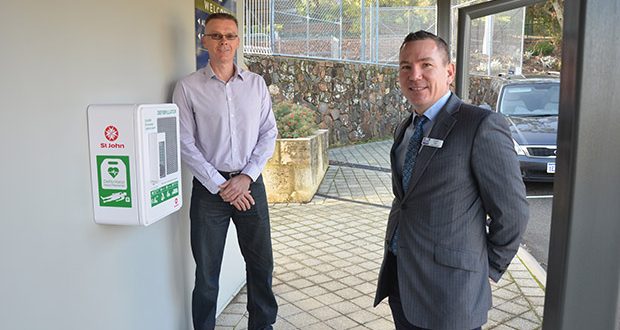 A Perth Hills family will never know if a defibrillator could have saved the life of 14-year-old Elysha von Knoll after she collapsed at Mundaring Recreation Ground on January 26, 2019.

Even though one was just 200m away, it was locked inside the Mundaring Arena.

In the hope of saving other lives and saving another family from the same question, Elysha’s father Kurt von Knoll has been on a mission to see more defibrillators installed externally.

“One of the first things I looked at trying to improve [after her death] was the accessibility of defibrillators in the Shire of Mundaring,” Mr von Knoll said.

“We wanted to ensure what happened with Elysha didn’t happen to anyone else.

“The tragic part is we knew there were defibs in the sporting arena but it was Australia Day and the arena was closed.”

Early use of a defibrillator can increase the survival rate of someone suffering a sudden cardiac arrest outside of hospital by as much as 70 per cent, but the lifesaving equipment is no use if it is inaccessible.

There are about 5000 defibrillators registered with St John WA in the state but only a quarter are fixed externally.

Kurt notified the Shire of Mundaring about the importance of defibrillator accessibility.

The Shire agreed and as a result, funded and organised the installation of seven devices externally at Shire’s facilities including Lake Leschenaultia, Mt Helena Aquatic Centre,  the Hub, library and administration centre in Mundaring, Mundaring Oval Pavilion and Bilgoman Aquatic Centre.

Kurt then partnered with St John WA to raise awareness about the need for external units and to raise funds to relocate indoor defibrillators into external cabinets, successfully seeing another 15 defibs relocated outside.

This week the von Knoll family donated a defibrillator and had it positioned outside a main building at the Helena College Junior School on Ryecroft Road in Darlington, Elysha’s primary school, for access by all Darlington residents.

“I think there’s a bit of apprehension around using defibrillators but they are a lot easier to use than people are aware,” he said.

“It’s all voice prompted and St John have a video on their website to show how easy they are to use and a First Responder app for iphone and android.

“Not only does the app have a defib locator but if you dial 000 through the app the operator knows your location and if there’s a registered qualified first aider within 500m of an incident they can be notified and get there quicker than an ambulance.”

As well as continuing to raise awareness of sudden cardiac arrest and the importance of defibrillators the family are also fundraising for St John WA so more internal defibrillators currently in the community can be relocated outside.

“I do look back and think if only we had access to [a defibrillator] it could have made a difference” Mr von Knoll said.

“It doesn’t make it any easier with the loss of Elysha, but you do think of how you could prevent this from happening to someone else.”

This article first appeared on The Echo Newspaper