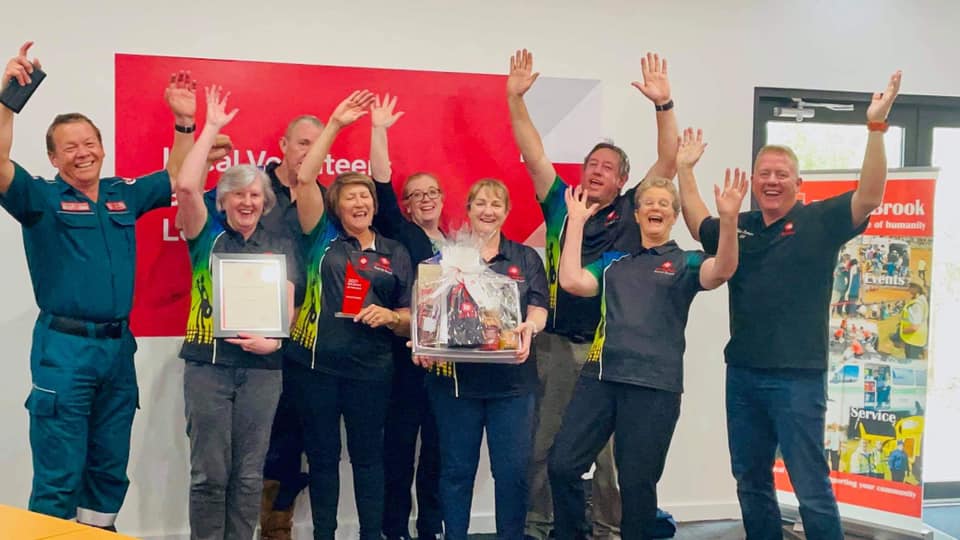 St John WA’s Boyup Brook Sub Centre has taken home the Sub Centre of the Year Award at the annual St John Experience recognition ceremony. The awards recognise sub centres and individuals across the state who go above and beyond to support the services St John delivers.

The Boyup Brook Sub Centre is known for delivering high-quality ambulance services, volunteer training and first aid training in the South West. The sub centre is run by a team of dedicated volunteers who are committed to supporting the local community with their healthcare needs.

The Boyup Brook volunteers were recognised for being consistently reliable when requested to attend a scene and praised for their response rate by the St John State Operations Centre (SOC). Despite community call outs for support continuing to increase, the team continues to actively support and complete transfers for other sub centers in the local Blackwood region.

The work the Boyup Brook Sub Centre volunteers have put into the community stretches far and wide, with the team being responsible for placing over 20 defibrillators (AEDs) throughout the South West region.

Since originally opening to the community in 1982, the Boyup Brook Sub Centre has undergone a series of upgrades and extensions to meet the requirements of an expanding volunteer base. To support the growing volunteer pool, the sub centre is unveiling a new and improved facility, set to officially open next month.

St John WA CEO, Michelle Fyfe said she is pleased to see a dedicated group of volunteers recognised for their efforts to support the Boyup Brook community as a collective.

“Our regional sub centres and volunteers are an essential part of St John WA. Without these dedicated volunteers, St John would not be able to deliver the world class service it does,” said Ms. Fyfe.

“The Boyup Brook Sub Centre team have gone above and beyond in their commitment to servicing the local community and they have been rightfully recognised for their efforts. We’re very proud to be honoring this high-functioning facility with a well-run committee and a great team of enthusiastic and engaged volunteers.”

St John Boyup Brook Sub Centre Chairperson, Angela Hales said they were blown away to be awarded Sub Centre of the Year.

“Our team is known for their dedication, their commitment and compliance. We will soon have an awesome building, but it’s actually not the building that makes the team, it’s the awesome volunteers that we have at Boyup Brook. And that’s why we turn a crew out for any calls that come through from the State Operations Centre,” said Ms. Hales.