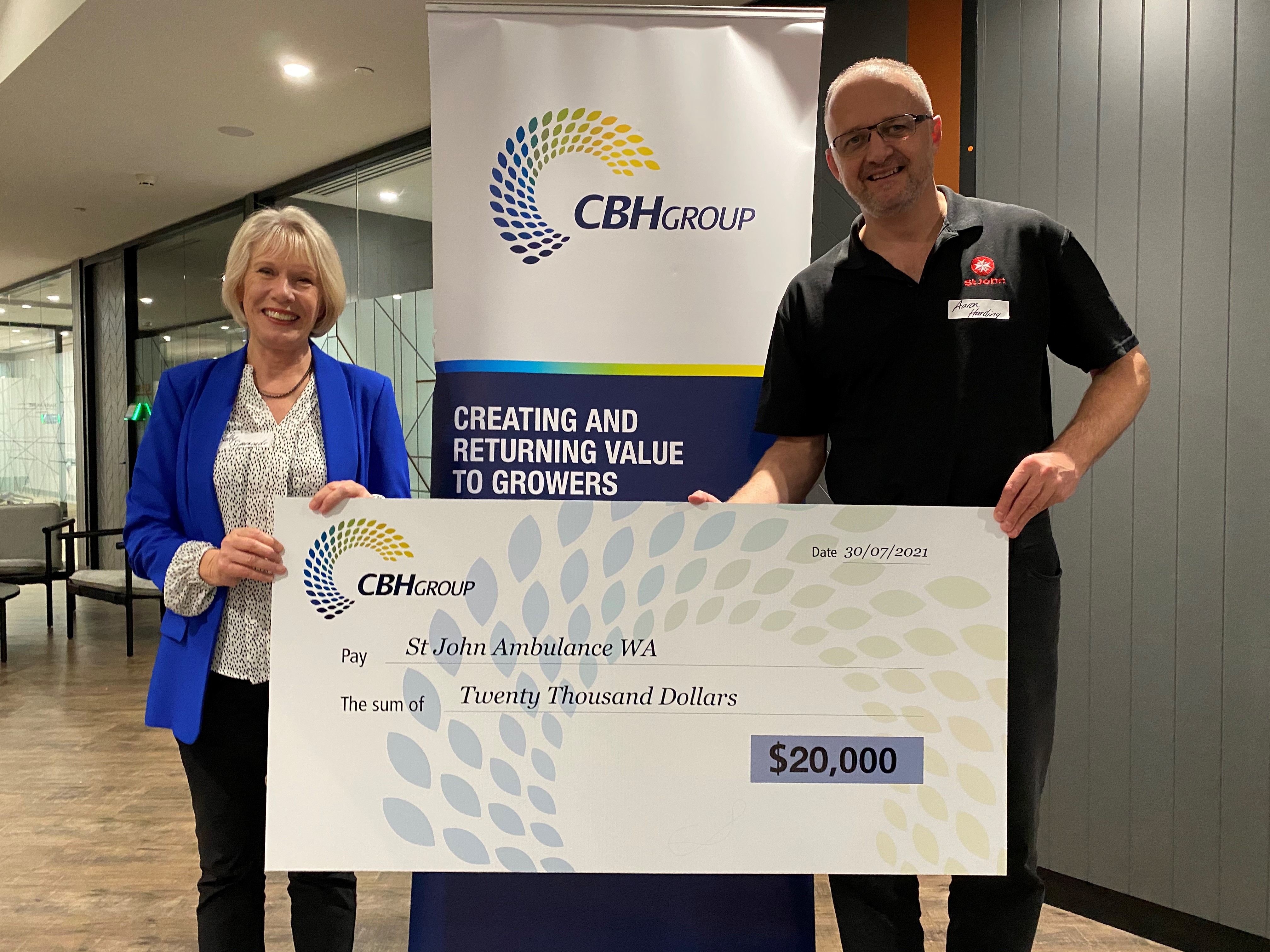 CBH Group has donated $20,000 towards the purchase of St John WA defibrillators across regional WA. This figure marks a new milestone for the partnership, with CBH Group donating more than $195,000 since the commencement of the partnership almost 10 years ago.

The latest donation has resulted in the purchase of 19 new defibrillators, set to be installed across grain growing regions to support St John WA’s Community First Responder Program (CFR). To date, 116 St John WA defibrillators have been installed across regional WA communities thanks to CBH Group, including 25 in the Goldfields/Esperance region, 27 in the Great Southern, 26 in the Midwest, 37 in the Wheatbelt and one in the Northwest.

Since the commencement of the partnership in 2012, CBH Group has provided funds and lifesaving equipment to regions including the Goldfields, Esperance, Great Southern, Midwest, Northwest and Wheatbelt through the reinvestment of profits from excess grain as part of their Harvest Mass Management Scheme (HMMS).

The CFR Program is a St John WA initiative that enables community members to provide help in the crucial minutes before an ambulance arrives. This program is now operating in more than 5800 locations across Western Australia which continues to grow.

“St John WA covers the largest area of any single ambulance service in the world – 2,525,500 square kilometres or 33 per cent of the total landmass of Australia. Our team of country volunteers travel more than two million kilometres across country WA annually, transporting more than 64,000 people,” Ms Simmonds said.

“Through partnerships with organisations like CBH Group, we’re able to empower people in regional communities to potentially save someone’s life in the event of a sudden cardiac arrest. With 116 defibrillators available across regional WA, CBH is helping to build a more resilient community.”

CBH Group Chairman, Simon Stead said it had been a pleasure to support St John WA over the years.

“The HMMS continues to be an effective deterrent to the overloading of grain trucks during harvest while giving back to regional communities at the same time,” Mr Stead said.

“Through HMMS, growers are extending their support for charities that play a supporting role in their communities.”

The CBH Group is Australia’s largest co-operative and a leader in the Australian grain industry, with operations extending along the value chain from fertiliser to grain storage, handling, transport, marketing and processing. Owned and controlled by approximately 3700 Western Australian grain growing businesses, the core purpose of the CBH Group is to sustainably create and return value to growers.