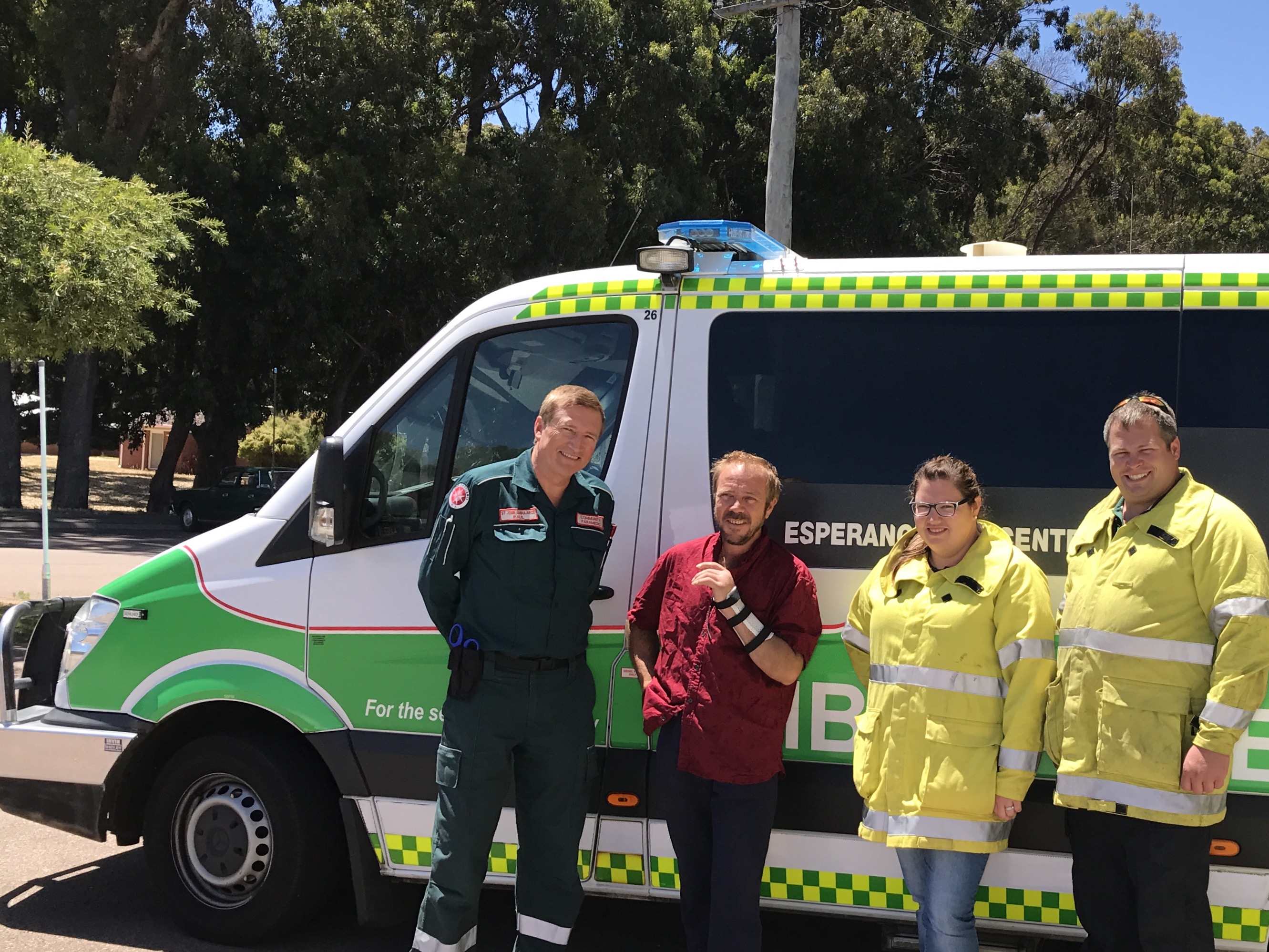 Farm worker Jason Holmes found himself in a very tight situation when he ended up trapped in the bottom of a chaser bin on a farm in Cascades, about 100 kilometres northwest of Esperance late last year.

To make matters worse, his arm was trapped in an auger from his elbow upwards. This type of auger was a square tube of metal about 20cm in diameter with a rotating blade much like a giant drill bit which transports grain from the bottom of the chaser bin up and out to another bin or silo.The final complication was that no one knew he was there.

So it was a long 90 minutes before another worker discovered him trapped at the bottom of the bin.When the alarm was raised, an Esperance ambulance crew of Rachel Doney and Julie Bridson along with Esperance community paramedic Paul Gaughan and volunteer ambulance officer Sue Willoughby were dispatched to the scene. Two local first responders also attended, Tom Walker and David Rhodes.

Mr Gaughan said it was a daunting scene they faced upon arrival.

“The walls of the chaser bin were nearly four metres high so access was gained by a ladder,” he said.“Once inside the bin it was difficult to maintain a stable position to work because both sides of the floor slope inwards to the middle at a steep angle. Because the patient was lying along the middle where both sides of the floor sloped and met, with his arm severely trapped up the auger, the position for emergency workers was precarious as any knocking of the patient or falling onto him from the sides would increase his pain.”

Members from the Esperance Volunteer Fire and Rescue soon arrived and set to work trying to set the injured patient free.

“Several attempts were cautiously attempted without success, including a manual backwards rotation of the blade,” Mr Gaughan explained.“Part of the problem was that the arm was hidden inside the auger and it could not be seen how it had been trapped by the blade.

Eventually it was decided to angle grind through the metal and create a lid on the top of the tube and opened up so the hand could then be freed.

”Eventually the patient was freed and transferred onto a fire truck before being placed onto the stretcher. During this time the state operations centre had tasked the RAC Rescue helicopter to attend and it was decided that the best course of action was to transfer the patient directly to Esperance airport where the helicopter could refuel and take the patient to RPH."

After an hour’s transport to rendezvous with the helicopter, Jason was transferred to the care of critical care paramedic Clinton van der Westhuyzen. His arm had been crushed for three and a half hours and was 50 per cent amputated at the top of his wrist.

Recently Jason, with his arm thankfully still attached, visited St John Ambulance Esperance Sub Centre to say thanks to his rescuers. Although he still has a long way to go with his rehab, he can move all of his fingers and has nothing but praise for all those involved in his remarkable rescue.

Mr Gaughan said this rescue was one that stands out for its challenges and collaboration.

“This was a rescue which involved a lot of problem solving in difficult circumstances in a very isolated and remote part of the southern Goldfields, where both DFES and St John Ambulance worked together as a team to bring about the best possible outcome to a traumatic crush injury.”