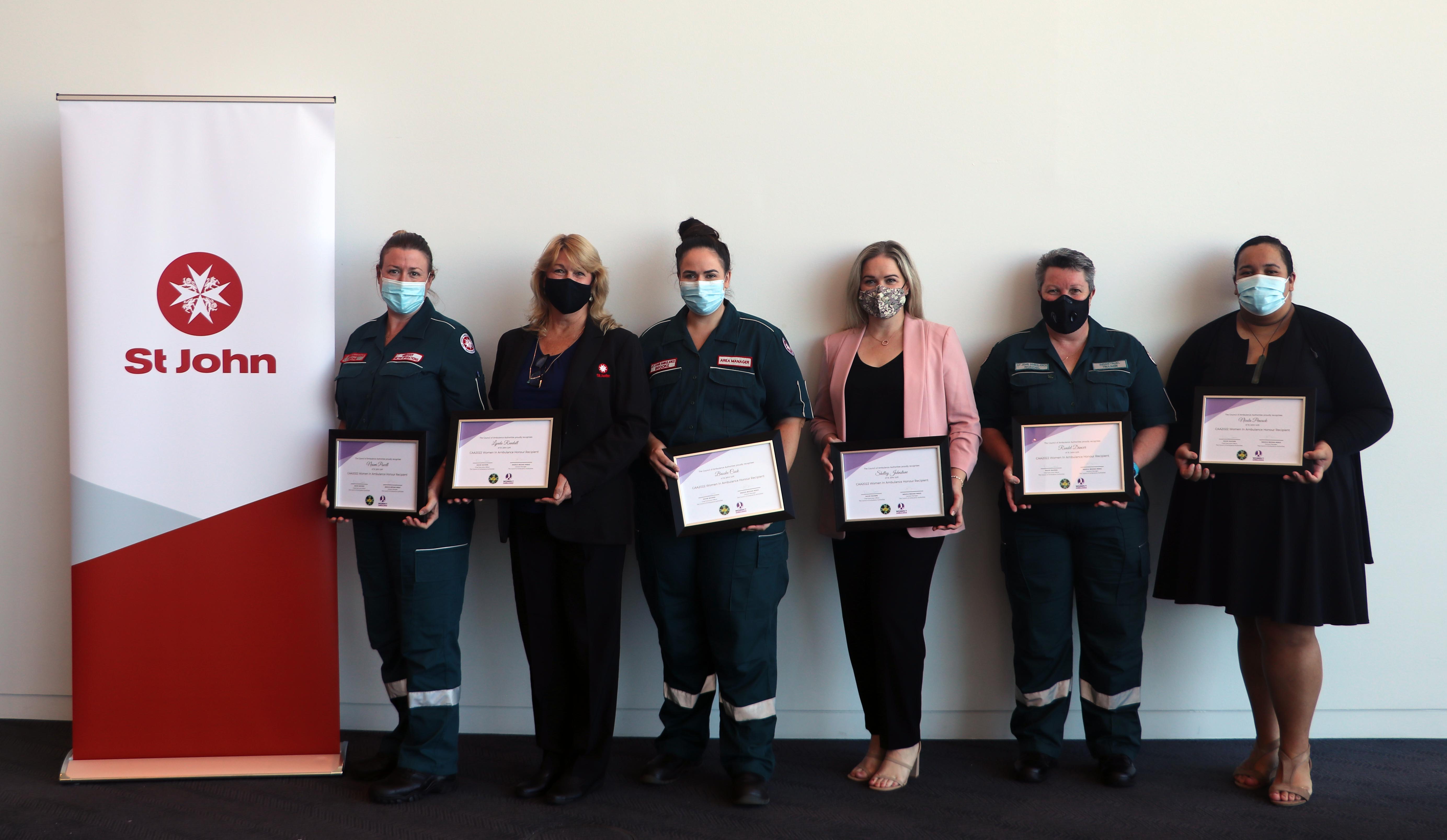 Six St John WA team members have been recognised Council of Ambulance Authorities (CAA) at the 2022 Women in Ambulance Awards.

St John WA Chief Executive Officer Michelle Fyfe said she was proud to see resilient women from a variety of roles recognised at this year’s awards.

The 2022 Women in Ambulance Awards began in 2020 to highlight successful and hardworking women across Australia, New Zealand and Papua New Guinea. Each award recipient was presented with a certificate and pin and has been invited to attend CAA Women in Leadership Forum in Sydney in 2023.

Shelley Johnstone’s career with St John WA began in 2008 as a Student Ambulance Officer, graduating in 2010. Recognised for her 14 years of service in St John WA’s regional network, Shelley worked hard to develop her clinical scope undertaking various country relief positions in locations including Bunbury, Dawesville, and Busselton.  Shelley recently relocated to Albany in the Great Southern of WA, where she is back in an Ambulance working alongside a fantastic and dedicated group of volunteers.

Nicola started within a reception role in St John Health Cannington in 2016. New to the industry she thrived on learning and contributing positively to a team that soon became a family. After three years in the role Nicola was ready for a new challenge and way to add value to the field which she had become passionate about. She has been recognised by the CAA for her commitment and passion for improving health outcomes. Nicola’s most recent career step sees her as a Recruitment Consultant with St John Health a new and exciting path that she is very grateful to take part alongside an amazing team.

Naomi Powell commenced her career in 2004 as a 21-year-old studying for a nursing degree when the Station manager of the local St John depot convinced her to become a volunteer and then apply to become a paramedic. Recognised for her longstanding tenure of 18 years in ambulance, Naomi has taken on many opportunities and excelled. She has worked in leadership roles for Metropolitan Operations – as Station Manager, Team Leader, Area Manager, Metro Logistics Manager and is now a Manager of Metropolitan Operations.

Lynda Randall started with St John Ambulance in 2008 as a Rostering Administration Officer, working closely with on-road Paramedics providing a commitment to meeting daily Operational Requirements. Lynda was recognised for her role in ambulance operations. She constructs and maintains rosters for all Paramedics, Transport & Communications Officers in WA which Lynda finds rewarding, particularly being able to empower her team with energy and enthusiasm during what can be challenging work.

Brooke Cook, Area Manager that oversees Kelmscott and Serpentine stations, joined St John WA on road in 2010 in the Student Ambulance Officer program at Edith Cowan University.  Brooke was recognised by the CAA for her enthusiasm, work ethic, positivity and determination has enabled her to work in various roles and departments within St John including Country relief, working alongside volunteers and various roles within the College of Pre-Hospital Care (CPHC) responsible for training and assessing, continuous improvement and facilitation and creation of training courses for paramedics.

Rondel Dancer is Trainer and Assessor and Volunteer EMT with St John WA. She is passionate about imparting knowledge, coaching staff and Volunteers. Rondel was recognised by the CAA for her commitment to continuously improving training delivery and the student experience. She enjoys being a Volunteer and working within the regional community.