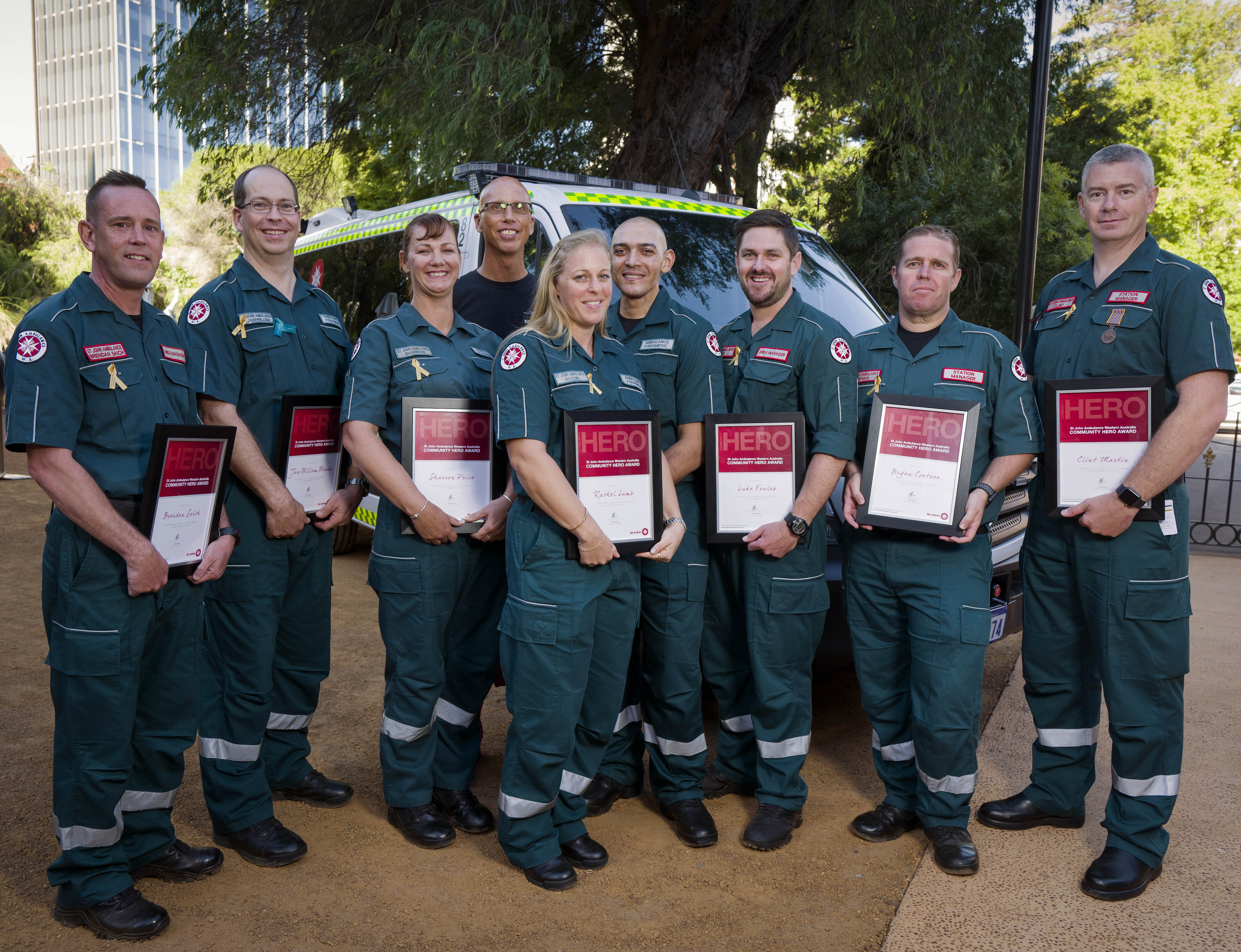 The Governor of Western Australia, Her Excellency the Honourable Kerry Sanderson AO, will today present Community Hero Awards to members of the public and St John Ambulance Western Australia volunteers and staff at Government House.

The Community Hero Awards are awarded to individuals who have displayed exceptional judgement and skill to deliver care to someone having a medical emergency.

“These people have demonstrated courage, skill and exceptional judgement in putting the needs of others first and they thoroughly deserve this recognition,” he said.

Mr Ahern said the awards highlighted why St John is committed to making a first aid a part of everyone’s life.

“The more people who are trained, the better the health outcomes – it is really that simple,” he said.

A panel of prominent West Australians from media and health fields helped select the award recipients.

In addition to these awards, 30 National Medals were awarded to ambulance and communications personnel in recognition of their service.

Paid employees who have provided 15 years of unbroken service for St John were eligible for the National Medal, with clasps for every 10 years of service thereafter. The National Medal is a recognised award within the Australian Honours System. 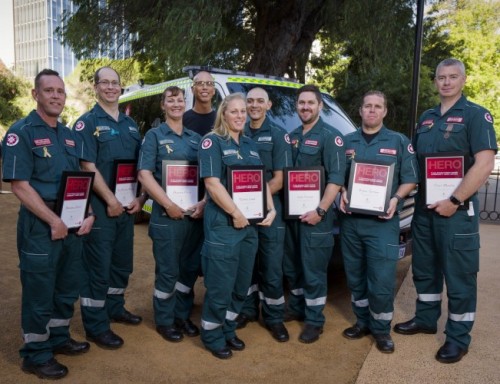 In the early morning of the 10th October 2016, the ambulance driven by paramedic Sharron Price, with co-worker Wesley Ackerman in the passenger seat, was hit head-on on Mundijong Road in Oldbury. Sharron, who received minor injuries in the crash, immediately moved to locate Wesley and called through to the State Operations Centre to initiate response. Area Manager Brendan Saich and paramedics Rachel Lamb and Clint Martin were first on scene, followed within minutes by paramedics Bryan Coetzee and Jan-Willem Weeda. Next on scene were area manager Luke Fowles and critical care paramedic Chris Gleisinger.

It was difficult to view Wesley, let alone treat and get him out. The ambulance was on its roof and Wesley was held up and entangled in the wreckage, keeping him suspended upside down. Brendan said: "At one point, once Wes was spotted, all I could see was one arm and one leg - the rest of his body was blocked by the mangled ambulance."

Brendan immediately took control of the incident, while Clint, Rachel and Bryan, who are co-workers of Wesley's, worked alongside emergency service crews to extricate him from the wreckage. Access for the paramedics to Wesley was through a pool of knee deep water, then into the crumpled ambulance.

Jan-Willem at the same time started treatment of the other driver stating, "It was extremely difficult to pull yourself away from not going to attend to your fellow colleague, and ensuring you give your full clinical attention to another patient who clearly needed assistance." This action ensured that Wes and the other driver got the clinical attention required for the best possible outcome of both. The other driver was then transported by ambulance on priority conditions to Royal Perth Hospital.

Wesley's condition deteriorated after he was extricated from the mangled wreckage; he went into respiratory arrest and the actions of Chris Gleisinger were crucial to Wes's survival. Chris secured Wesley's airway and administered lifesaving units of blood, ensuring he could get to hospital alive. Wes was then rapidly transported by the Rescue 65 helicopter, while being clinically managed by Chris and Bryan, to the Trauma unit at Royal Perth Hospital.

While the ongoing advanced life support of Wes occurred, Brendan Saich wanted to ensure maximum support for Wesley's family was put in place at the earliest time, so he headed off to Wesley's home to ensure we could give the news first hand to Odile and then brought her to Royal Perth Hospital. Luke Fowles had taken over control of the scene in order for this to occur.

The fact the St John officers were dealing within a very confined space, alongside the fact Wesley was suspended upside down, made it incredibly challenging to extricate him from the ambulance. Given the nature and number of injuries, the crew's clinical abilities were put to the test and their actions undoubtedly saved Wes's life. The situation of attending to a colleague (and for Bryan an extremely close friend) made a difficult clinical presentation even more challenging. The crews all displayed extremely high levels of professionalism and an unshakable commitment to saving a life and the best possible outcome for all on scene.

70-year-old Francis Sultana was using an angle grinder at a building site in Carlisle on 23rd February 2016 when suddenly the 23cm blade kicked back and cut him deeply him in the neck and shoulder area, narrowly missing an artery. His fast thinking co-worker John Healy immediately applied first aid, using rags and a tee-shirt to apply direct pressure to stem the bleeding and took directions from the State Operations Centre communications officer until the paramedics arrived on scene. John jumped in the ambulance and continued to apply pressure on the wound while the ambulance travelled Priority 1 to Royal Perth Hospital. The severe blood loss caused Francis to go into cardiac arrest en route to hospital and upon arrival; surgeons had to cut open his chest and massage his heart back into a normal rhythm. Francis has had extensive physiotherapy as a result of this accident and surgery to repair damaged nerves in his arm but he is otherwise fit and healthy. Francis is forever grateful to his co-worker and friend who saved his life.

On the exact same day as Francis Sultana’s accident and in a different part of the city, Michaela Peters had just woken up her 20 month-old twin boys from their afternoon nap and had turned to do a quick task. When she heard the silence, she intuitively knew something was wrong. She raced outside to see that the outdoor pool gate was ajar due to a faulty spring mechanism, and her twin boys were both face down in the water. Her first thought was, “I have to get them out. They’re too young to die, they’ve just started their lives.” Michaela immediately jumped into the pool and dragged them both out of the water and commenced doing CPR. It was impossible to do effective CPR on both boys but luckily her husband arrived home at this time and rang triple zero and they both frantically continued to perform CPR until the paramedics arrived on scene. The twins were both unconscious and were having difficulties breathing and were rushed under lights and sirens to Princess Margaret Hospital. Thanks to their parent’s first aid, they both survived the ordeal with no lasting injury.

When a high speed car roll-over occurred 120km out of Onslow on 23 September 2016, local St John volunteers dropped everything and raced to the scene. Anna, Callum, Tracey and community paramedic Katie Evans worked together to treat the seven seriously injured patients, which included a child. Eight people were assessed on the scene so triaging was required, as well as precise team work and coordination. Community Paramedic Katie Evans was generous in her praise for the volunteers, some who had never experienced a trauma case before. She said: “All of the volunteers were outstanding in their level headedness and ability to make critical decisions in an unfamiliar environment.” The ambulance officers helped care for the patients who had injuries including fractured jaws, legs, hips and a suspected spinal injury. The patients were transported to Onslow Hospital where Anna, Callum and Tracey all showed their unwavering commitment to their patients by assisting the doctor at the hospital. Once assessed, they even transported the seriously injured patients to the airport for RFDS transfer to get them flown to Perth. This massive and challenging job took 11 hours to complete from start to finish.

While shopping in the Perth CBD in July 2016, father of two Bill Tucker suffered cardiac arrest, fell and was clinically dead before help arrived. Kathmandu assistant manager Abigail Adamson responded to screams for help from bystanders and rushed outside the shop and saw Bill lying on the ground, unresponsive, grey and with no pulse. She immediately took charge of the scene, directing someone to call triple zero and started CPR, having completed her CPR training a few weeks earlier with St John. The ambulance crew arrived on scene shortly after and as Abigail’s CPR was so effective, they asked her to keep going while they did various clinical interventions including providing shocks from a defibrillator, which led to Mr Tucker’s revival. Mr Tucker was rushed to Royal Perth Hospital where he spent five weeks and has since made a full recovery with nil ongoing physical deficits. Abigail said: “It was a bit of a scary experience, but it just goes to show that anybody can do first aid.”

When Critical Care Paramedic Ben Harris started his work shift on the RAC Rescue Helicopter on November 6, 2016, little did he know that he would soon perform one of the most remote and challenging aeromedical retrievals since the services commenced operation in 2003. At 2pm a request came in from the Australian Maritime Authority to assist a badly injured crewman on a fishing boat in Israelite Bay, 114 nautical miles east of Esperance, who had partially amputated his left foot in an accident on board. The RAC chopper was deployed, with Captain Craig Bowman, air crewman Garth Fitzgerald and Ben on board, and eventually they rendezvoused with the vessel. Ben was winched down to the vessel in the four to five metre swell and 20 to 25 knot winds in extremely challenging circumstances. Last light was fast approaching and as the chopper cannot winch to vessels in the dark, Ben was informed he had only a few minutes on board the vessel. It took a few attempts to get on the deck, whereby Ben began to work on the patient. He applied a tourniquet to assist with blood loss and did some quick splinting and packaging. With the light almost gone, Ben signalled to be winched back up to the chopper.

The patient, 27-year-old Kye Palmer, was flown back to Esperance and en route received two units of packed red blood cells. From Esperance he was transported to Perth by RFDS and had to have his lower leg amputated at Royal Perth Hospital. The entire operation took twelve and a half hours from start to finish. Kye has since returned home to Esperance and is eager to meet his rescuers so he can thank them.

When Critical Care Paramedic Clinton Van Der Westhuyzen completed a training session with trauma surgeon Dr Sudhakar Rao at Royal Perth Hospital on the treatment of tension pneumothorax, he had no idea that two weeks later he would put those skills to the test. On the 6th February 2016 Clinton attended a major motor vehicle accident on Indian Ocean Drive where two cars were involved in a high speed head-on collision and one of the drivers, Simon Treloar, was trapped inside his vehicle. It took an hour for him to be cut free from the vehicle and his injuries included a collapsed lung, fractures to both legs and multiple lacerations. By then the RAC Rescue chopper and Clinton were on the scene, assessing the patient. After attempting a needle decompression, which did not work, Clinton diagnosed that the patient required an urgent finger thoracostomy to relieve pressure in the chest which threatened to trigger a cardiac arrest. Clinton did not have the authorisation to do this so he asked Dr Yeboah, an off-duty trauma surgeon who was on scene, to do it. Dr Yeboah performed the task and the patient was then transported to RPH. Following an extensive recovery, which included several surgeries, he is now recovering well and is extremely grateful to his rescuers.