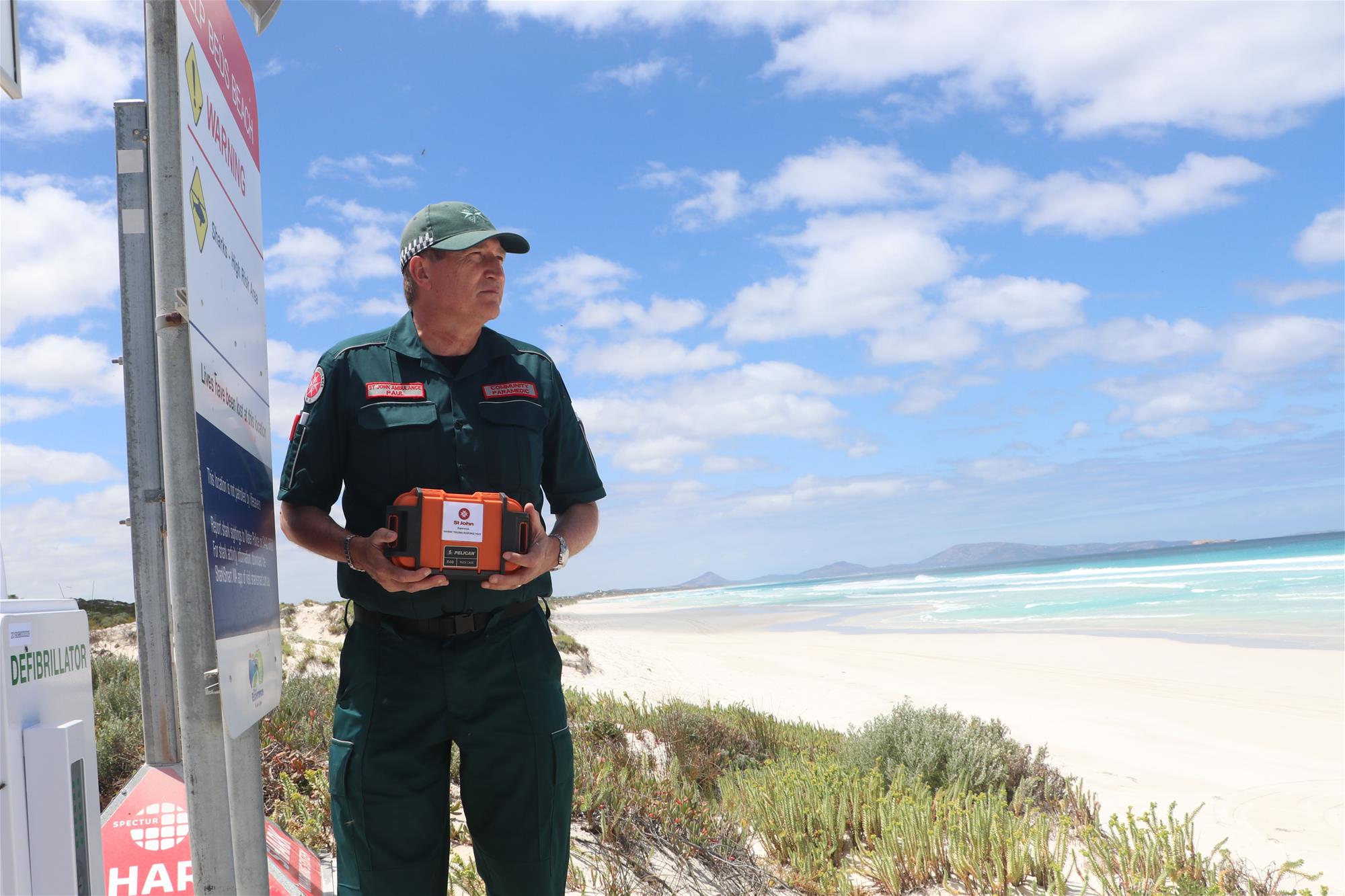 Ten community MTRRs have been activated across Esperance’s popular beach locations including Kelp Beds, Duke of Orleans Bay, Lucky Bay and West Beach. Each MTRR includes a Combat Application Tourniquet and a variety of dressings and gloves, which are housed in an black Pelican waterproof, dustproof, drop proof case.

The MTRRs are kept within St John WA’s Automated External Defibrillator (AED) units, which are located within close reach of the Beach Emergency Number (BEN) signs that aim to improve emergency response times by providing accurate location information. The MTRRs are free to use and will help support patients in the vital minutes between the incident occurring and first responders arriving on scene.

The MTRR project was made possible by the Esperance Community Fundraising Group, which secured $4,000 to fund the 10 new MTRRS and a new AED. The new AED has been installed at Kelp Beds, a popular beach for surfers where two residents have tragically lost their lives in the past three years due to shark attacks.

Esperance Community Fundraising Group Secretary, Sue Elliot said the donation to develop the MTRRs has had a profound impact on maintaining the safety of beachgoers in the coastal town.

“Esperance is known for having some of the most picturesque beaches in the country. Our town lives and breathes by the beach, which is why we funded the MTRRs. This new resource plays a vital role in helping keep our community and visitors safe,” Ms. Elliot said.

“St John WA’s MTRR project was developed by our local team here in Esperance in response to the three shark attacks that took place across our coastline in the last three years. Being the first responders to such emergencies, we decided to develop a resource that houses tools to support major trauma in the vital time between an ambulance being called and when we arrive on scene. Through our experience, it’s these tools that often save a life,” Mr Gaughan said.

“Shark attacks are one of many emergency incidents that can occur at the beach. MTRRs also help support patients with common incidents such as deep cuts or grazes and add to St John WA’s existing footprint of AEDs available by the coastline. We’re extremely grateful to the Esperance Community Fundraising Group in helping fund the initial ten MTRRs. We’re hoping to scale this cost-effective resource broader in the coming years,” he said.

MTRRs are accessible to the community through the St John WA Community First Responder network and the state emergency operations centre, which provide a safety code to unlock the contents of the unit.

A full list of MTRRs locations can be found on the St John WA Community First Responder app.