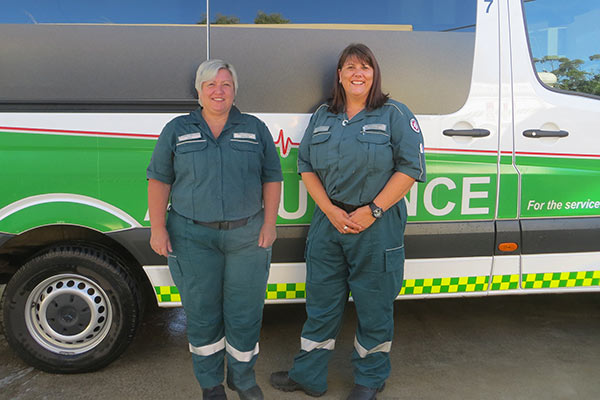 ortham Sub Centre is the first St John Ambulance location in WA to recruit nurses to work in patient transport.

Country Ambulance General Manager Julian Smith said the nurses were brought in to assist with the transfer of patients from district hospitals to regional and metropolitan hospitals.

“We recruited two nurses to help us respond to the large volume of transfers that are done from Northam to Perth, as well as from smaller towns coming in to Northam,” Julian said.

“When this has occurred in the past hospitals have sent nurses to escort the patients. With St John Ambulance providing nurses, the hospital nurses are able to remain in the local hospital rather than escorting the patients.

“The feedback has been really positive from the hospitals, the surrounding smaller sub centres, our ambulance volunteers and other nurses.”

Lily and Vanessa work Monday to Fridays, on alternate shifts, each teamed with a transport officer.

“Northam does a lot of transfer work and this has reduced the strain on our Northam ambulance crews,” Julian said.

“Having qualified nurses available for patient transfers has greatly assisted both St John Ambulance and the WACHS in the Wheatbelt area, easing the pressure on our volunteers and paramedics.”

“If the need arises, our nurses will also respond to priority 2 and 3 calls in the community as they have more advanced skills than other transport crews.”

Lily and Vanessa did a two week induction course with St John, familiarising them with the ambulances and training them in our equipment, before starting at Northam.